When we look at Ray Richardson’s practice over the last two decades, and absolutely at his current work, we feel we are engaging with situations from a universe of his own making, a self-generated milieu, a place he himself inhabits not simply when he is working.

This begs the question, where exactly is this world? When is it, what is going on in it, and what are we witness to in it? It is a world we think we know, but something tells us that we have never been there, that this place does not in fact exist away from these painted surfaces. Despite the complete recognition we feel in front of the various scenarios, we know that we are looking at a process of staging, collaging, manoeuvering, and re-arranging, that shifts the specifics of places and people into another dimension.

The writer Charlie Phillips has described Richardson’s process as filmic, in that there is a sense of an artificially composed space, of a staged drama about to break into motion. It’s a good image, but for me, a more powerful resonance in the paintings goes a long way further back, and is to do with the slow unfolding of the history of genre painting. For the last four centuries onwards, artists have engaged with the prosaic banality of everyday life. In the 17th century, when Rembrandt, Vermeer, Steen, Cuyp, Hobbema, Ruisdael, Dou, de Gelder, and other Dutch artists used the street, the pub interior, the middle-class sitting room, farmer’s fields, the club house, or the bedroom as subject matter, they inaugurated the move to modernity, in their collective recognition of who we really are and what we actually do. Of course, they didn’t depict exactly what was in front of them – as with Richardson four centuries later, they were very comfortable with staging and collaging, with an adjusted reality: Rembrandt often dressed his models in fashions from previous decades, and collected props and back-drops to decorate his scenes – but nevertheless he was concerned with given-reality. In the 19th century Courbet invented the term Realism, and the Impressionists picked up on this spirit and radicalized art by celebrating the snatched and blurred scene as the signifier of urban life. In the twentieth century, the Ash Can School, the Kitchen Sink painters, George Bellows, Edward Hopper, Lucien Freud, and many others consolidated the street and the domestic interior as principal arenas for painting. These artists rendered the invisible visible, the risible noble, and the banal magical. A street car could be to do with desire, and the most brutal of things could taste of honey. They replaced the gods, demons, myths and dreams that had cantered across the surfaces of art for millennia, with the environment they found themselves in: it was a powerful recognition of modern secular life. It might have been Jean Paul Sartre who told us God was dead, but these painters had been demonstrating it for three centuries. This centuries-old poetic secularism is intensely alive in Ray Richardson’s worldview.

This particular heritage has also been to do with rendering the every day world timeless, by making things into archetypes. In Richardson’s work we find the same characters reappearing, and so we come to understand the paintings collectively as an ongoing dialogue, a use and re-use of characters and places that accumulates into a vocabulary of archetypes that makes the specific into the universal. So behind the commitment to reality in what he has chosen to depict – man with dog, man in sunglasses, boy with head phones, man and car, woman and toy, dog on chair, men in the street, woman leaning on a car, the Bull Terrier – the quiet push into timelessness can be constantly felt.

Related to this dialogue between the specific and the general is the powerful attention given to pose, which is crucial to the atmosphere of the works. The way people are posed, or more accurately the way they are ex-posed – caught not posing – sets the mood in virtually every work. Body language is everything here. Figures scurry across the picture plane on the way to closing deals, or half turn in response to a comment, or swing a briefcase nonchalantly, or front up to us cockily, or wedge their hands in their pockets. The depiction of casualness has an exactitude to it and is key to the narrative of the works. 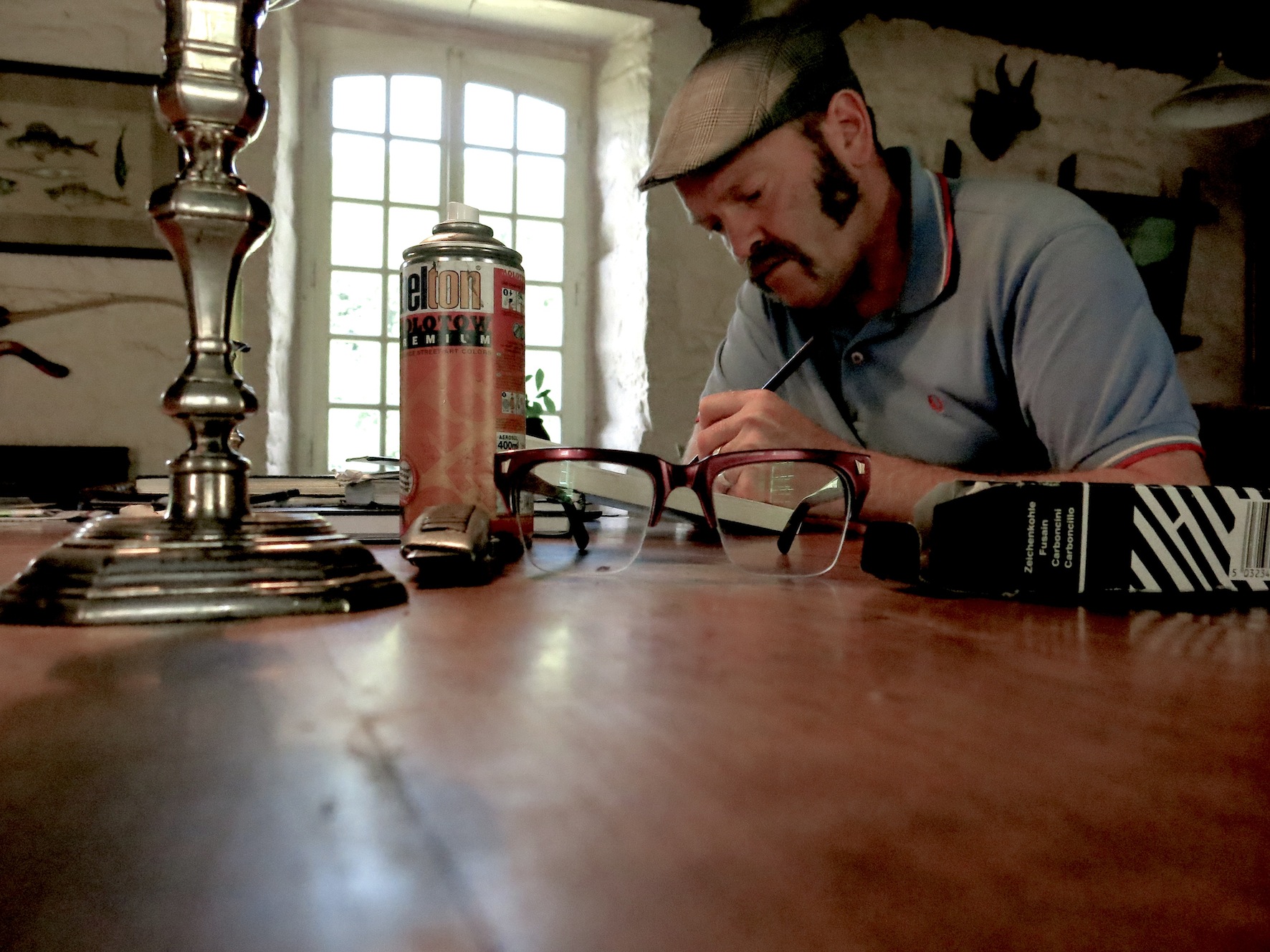 The paint is deliberately quiet and unobtrusive: we aren’t asked to celebrate gesture and surface here, but simply to observe the transition of one plane into another, and to enjoy the easy way depth and space appear between things. The colour is smoky, and rarely indulges in leaps forwards or backwards. Together, the surface and gradualist colour evoke a silence in the paintings. The tone is more early Bonnard than middleage Matisse, and definitely more Hopper than Bacon. Even though there are cars, city streets, loud-looking men on cell phones, and dogs, we never once think of noise, we don’t worry about what we can’t hear, and we feel comfortable in the muteness of the whole thing. This is unusual: most paintings in this subject range metaphorically make sound that might float or bounce around our inner-head. These are as quiet as Vermeer.

Perhaps the key to the recent work though can be found in the compositional vision of the artist. The paintings are carved up into a horizontal and vertical geometry that holds the figures in place and sets the emotional temperature of each work. Walls, street and house furniture are the vehicles for this geometry. The artist has always experimented with the format of his canvases. For example, his long flat rectangular canvases are interesting for the way they make a deliberate compositional statement in advance of paint being used. That shape demands an epic, wide-angle reading of the scene: in these pieces, all figures of any size carve up the space top to bottom. The best representational painters have always generated their own worlds. They have populated topographies with poetic logic, making places that parallel lived-reality, but remain enigmatically separate from it. So it is with the extraordinary painted world of Ray Richardson.